Rumors of Impeachment for President Trump? 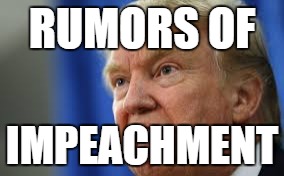 Donald Trump’s presidential campaign and election has been one of the most divisive and contentious in recent memory. Ever since he took office, there have been questions and controversies popping up left and right. People have questioned the legitimacy of this election, speculated about his possible ties with Russia and Putin, and expressed dismay over this very active and noticeably unchecked presence on social media.

Since he became President, he has signed an Executive Order to ban refugees and immigrants; promised to build a wall between the US and Mexico; started measures to repeal Obamacare without proposing a solid plan for replacement; allowed coal mining companies to dump pollutants in streams; and has taken several other controversial steps. Needless to say, there are many people who want him out of office and talk of the possibility of an impeachment of President Trump.

Impeachment is a power granted to the Congress by the constitution to essentially put certain elected officials on trial. If the officials are proven guilty in this trial, they can be removed from the office and therefore impeached. The process involves both the legislative arm of the government while the executive branch isn’t involved.

The legislative body decides whether there are any grounds for impeachment before they hold a formal trial. This trial decides whether it can convict the official if they’re found guilty. This brings us to our next point:

On What Grounds Can A President Be Impeached?

You can’t just impeach the President because you dislike him or disagree with his political stance. In fact, the judicial department won’t even investigate the President until they have very serious allegations and enough proof to warrant an investigation. The grounds for impeachment are laid out in the constitution in Article II, Section 4:

“The President, Vice President and all civil Officers of the United States, shall be removed from Office on Impeachment for, and Conviction of, Treason, Bribery, or other high Crimes and Misdemeanors.”

As you can see, this statement is quite vague and doesn’t provide a clear definition of what can get the officials impeached. The House of Representatives decides what offences can fit that definition and that is very subjective. According to the former President Gerald Ford, the grounds for impeachment can be anything that the House of Representatives considers it to be at a given point of time or history. The grounds for impeachment today can be different from what they were 50 years ago. It’s generally understood that an official can be impeached if they:

• Use their Presidential power to profit or for personal gain.
• Exceed the powers of their Office as laid down by the Constitution.
• And engage in behavior completely unbecoming of their proper function in office.

It’s very difficult to find actions that can fit these categories of offences. For example, if Trump actually arrests someone and throws them in jail for being a political opponent or uses his influence as President to earn millions under the table, there might be grounds of impeachment.

What is the Process of Impeachment?

The impeachment proposal must go through a long process to be successful. The law is confusing and there are many safeguards in place to ensure the President can’t be impeached without due cause. Here’s a brief description of the process:

• The impeachment is first considered by the House Judiciary Committee. They will determine if there’s any cause of impeachment.
• If they find cause, the Chairman of the Judiciary Committee will initiate a formal inquiry into the issue of impeachment.
• After the inquiry is complete, the Committee will inform the Full House. They will explain they find impeachment warranted and that will trigger a debate in the Full House.
• The Full House will vote on every Article of Impeachment. If even one of the Articles of Impeachment is approved by a simple majority vote of the Full House, the President is considered informally impeached.
• The trial will then proceed to the senate. This is where they convict the President and finalize the impeachment.
• The President’s interests will be handled by his lawyers like in any court case. Some members of the House will be prosecutors. The Chief Justice of the Supreme Court will preside and the entire Senate will be the jury.
• The entire senate will debate and determine if the impeachment is valid. If 2/3 agree, the President will be removed from office.